The prime ministers of Italy and Greece on Tuesday joined a growing number of foreign leaders visiting Libya as it seeks to emerge from a decade of post-revolution chaos under a UN-sponsored peace process.

Italy’s Mario Draghi, whose country was the former colonial power in the North African state, held talks in the capital Tripoli, making his first trip abroad since taking office in mid-February.

“This is a unique moment for Libya,” with a new unity government in place, Draghi told a news conference, standing alongside interim Prime Minister Abdul Hamid Dbeibah.

Libya’s latest government hopes to bring together rival forces, especially the two main camps in the east and west, that have each been supported by foreign powers.

“The prerequisite for being able to move forward with courage is that the ceasefire continues and is strictly observed,” Draghi said, referring to an October deal that helped pave the way for the transitional government.

Draghi said it was time “to rebuild what is an old friendship.”

He said Italy’s embassy flew the flag as the “only” Western diplomatic mission to stay open through “all the long years of conflict” that followed Libya’s 2011 revolution which toppled dictator Moamer Kadhafi. 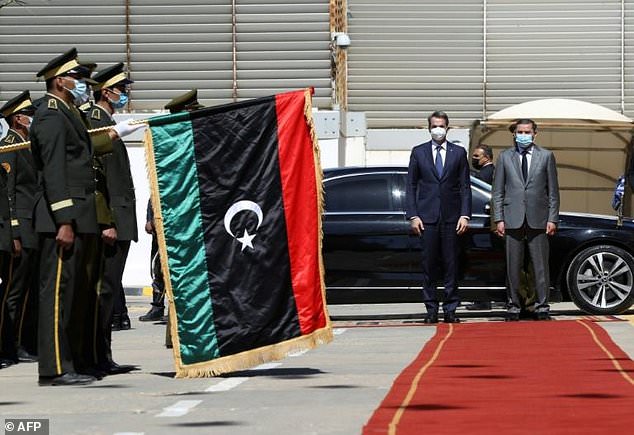 Italy is a major commercial partner for oil-rich Libya, where its energy giant Eni is a key player.

Draghi also expressed “satisfaction” with Libya’s missions to intercept and rescue migrants trying to reach Italy, some 300 kilometres (190 miles) north across the Mediterranean.

Libya is a major route for migrants trying to reach Europe, and traffickers thrived in the lawlessness that followed Kadhafi’s overthrow.

Greek Prime Minister Kyriakos Mitsotakis also arrived in Tripoli on Tuesday, to reopen his country’s embassy, following the example of France and Malta.

He said a Greek consulate in the second city Benghazi, in Libya’s east, would follow.

“Developments during the past decade have limited our economic relations, but the presence of Greek entrepreneurs in Libya has never been interrupted,” Mitsotakis told reporters, standing beside Dbeibah.

“Now that the situation has stabilised, interest is re-emerging.”

During Libya’s conflict, Athens backed eastern strongman Khalifa Haftar, after a UN-recognised Government of National Accord signed a controversial maritime agreement with Turkey in 2019.

Athens is fiercely opposed to the deal with Ankara, which claims much of the Mediterranean for energy exploration, conflicting with rival claims by Greece and Cyprus.

Mitsotakis said that “this new stage in our relations will allow us to correct and erase the errors made during the previous phase”.

He called for “the cancellation of illegal documents presented as agreements between states, even though they do not have any legal value”.

Tensions have spiked over Turkey’s hunt for gas in disputed eastern Mediterranean waters and an aggressive foreign policy push across North Africa and the Middle East.

On Tuesday, European Council President Charles Michel — who was in Tripoli himself last week offering EU support — was in Ankara along with European Commission chief Ursula von der Leyen, in their first meeting in a year with Turkish President Recep Tayyip Erdogan.

Dbeibah meanwhile said Libya was “ready to establish joint committees with Greece to resume discussions on maritime border demarcation and define the exclusive economic zone for each country between Crete and Libya”.

“We emphasise the importance of all agreements capable of leading to appropriate solutions, while preserving the rights of Libya, Greece and Turkey,” he added.

Dbeibah also called for European nations to reopen the airspace to Libyan aircraft.

No foreign airline currently flies to Libya for security reasons, and international flights — to Tunisia, Turkey and Egypt — are operated by Libyan companies.

On Monday, Malta’s Prime Minister Robert Abela visited Tripoli where he announced its embassy was to reopen, as well as promising that air links would “also be restored”.

The Libya meetings came as the head of the country’s presidential council, Mohammad Younes Menfi, announced the formation Tuesday of a High National Reconciliation Commission.

Menfi said the commission was mandated “to bring Libyans together, to repair and deliver justice”.

Irrespective of your viewpoint HRH the Duke of Edinburgh was an honest man with many viewpoints, a loyal husband and patriarch and a great servant to the UK. May he rest in peace.

Irrespective of your viewpoint HRH the Duke of Edinburgh was an honest man with many viewpoints, a loyal husband and patriarch and a great servant to the UK. May he rest in peace.