In a rare interview with an Israeli newspaper, a senior Libyan official with the eastern-based rebel government has called on Israel for support in the latest sign of the diminishing of anti-Israel taboo in Arab politics.

“We never were and never will be enemies, and we hope you will support us. It is only circumstance which has separated us up until this point,” Abdul Salam al-Badri told the Israeli newspaper, Makor Rishon, in excerpts from a full interview scheduled to be published this weekend.

The paper, associated with Israel’s national religious camp, said al-Badri, who is deputy prime minister in the government affiliated with strongman General Khalifa Haftar, gave the interview from Benghazi. It gave no further details.

Israel has no official ties with Libya, which was a staunch supporter of the Palestinian cause, especially under dictator Muammar Gaddafi, who was overthrown in 2011.

Libya has been in turmoil since 2011 when a civil war toppled long-time dictator  Gaddafi, who was later killed. The country has since split between rival administrations in the east and the west, each backed by armed groups and foreign governments. The UN-recognized Fayez al-Sarraj’s Government of National Accord remains in Tripoli. 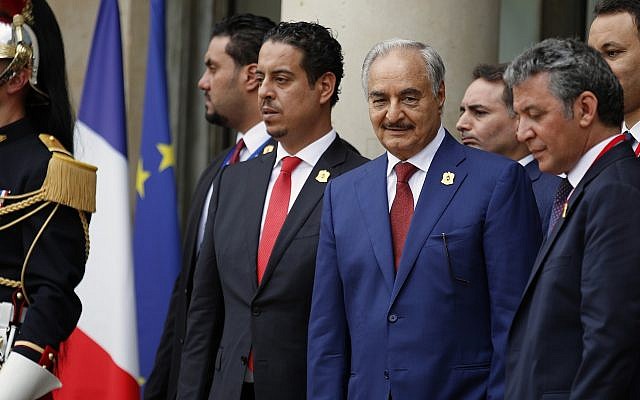 Libya’s Khalifa Haftar, third left, leaves after an International Conference on Libya at the Elysee Palace, in Paris, France on May 29, 2018. (AP Photo/Francois Mori)

Haftar, who launched an offensive aimed at capturing Tripoli last year, is backed by the United Arab Emirates, Egypt and Russia, while the Tripoli-based militias are aided by Qatar, Italy and Turkey.

Israel has avoided taking a public stance on the war, despite allegations of Israeli involvement behind the scenes. However, Israel is widely seen as being aligned with Egypt and the Gulf states.

Al-Badri pointed to recent stepped up intervention by Turkey, in his appeal to Israel.

“[Turkish President Recep Tayyip] Erdogan is not only insane. He is also a friend to the corrupt Emir of Qatar, and hired out thousands of Syrian mercenaries, all in the name of taking over Libya’s oil fields,” he said.

With Turkey’s military support, the Tripoli-based forces have gained the upper hand after retaking the capital’s airport, all main entrance and exit points to the city and a string of key towns near Tripoli in recent weeks.

“We share a common interest. Erdogan is a terrorist, and both of us are on the same side. It would be idiotic of us to ignore that,” al-Badri said.

Israel’s once good ties with Ankara have become strained over the last decade, but the two countries still maintain diplomatic relations despite ongoing tensions, particularly over natural gas in the region. 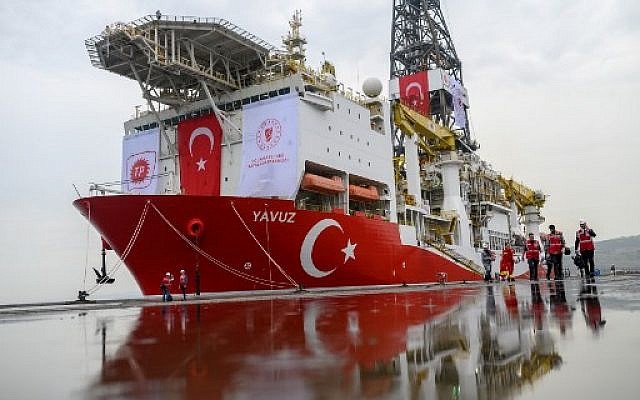 Journalists walk next to the drilling ship ‘Yavuz’ scheduled to search for oil and gas off Cyprus, at the port of Dilovasi, outside Istanbul, on June 20, 2019. (Bulent Kilic/AFP)

In Libya, Turkey seeks not only to push back its regional enemies, but also to ensure the success of a lucrative oil and gas agreement with al-Sarraj’s government in Tripoli. The Turkey-Libya maritime oil accord in the Eastern Mediterranean,  grants Turkey rights to drill for oil and gas in a vast area of the Mediterranean, despite the objections from Greece, Cyprus and Egypt. Turkey has said it will begin exploring for natural resources there within months.

Al-Badri called on Israel to join these nations in signing a common maritime agreement.

Israel has emerged as a natural gas player in recent years, forming the East Mediterranean Gas Forum with Egypt, Greece and Cyprus. The bloc views the accord between Ankara and Tripoli as a threat to their maritime rights.

Al-Badri played up Libya’s historic Jewish community, which he described as leaving a legacy of tolerance, and has said his government supported a two-state solution to the Israeli-Palestinian conflict.

“Throughout history, we have served as a refuge for people of all faiths. We have a long history of contact with the people of Israel and the Jewish community,” he said.

While the Libyan Jewish community dates back thousands of years, most Jews  fled the country in 1949 amid rising anti-Semitism following Israel’s establishment. Successive pogroms against Jews in the country and laws restricting Jewish civil liberties encouraged still more to emigrate. By the time Gaddafi rose to power in the 1960s, few were left.

How do you get an honest broker in #Libya

Take away countries with good intention but little influence and who are you left with?

The #US #UK #UN and a few others. That's the Reality

Long overdue, it's a sad fact of life but corruption is still rife in Libya. Anything that helps bring clarity to the award process has to be welcomed.

well done to you all for succeeding in such difficult circumstances, fixing the economy is a critical part of the rebuilding of Libya 👍

How do you get an honest broker in #Libya

Take away countries with good intention but little influence and who are you left with?

The #US #UK #UN and a few others. That's the Reality

Long overdue, it's a sad fact of life but corruption is still rife in Libya. Anything that helps bring clarity to the award process has to be welcomed.